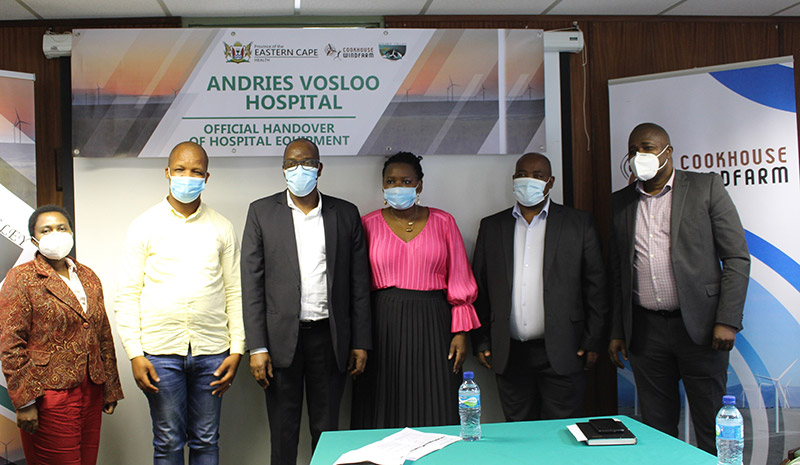 Much-needed medical equipment has been funded and handed over to the Andries Vosloo Hospital, a Provincial government funded hospital for the Blue Crane Route Local Municipality area, in Somerset East, Eastern Cape.

Funded by two of the areas wind farms, namely Cookhouse Wind Farm and Golden Valley Wind Energy Facility, the impact of the donated equipment is intended to cushion the blow of COVID-19 on this hospital.

“The Eastern Cape has been particularly hard hit by the pandemic, with the country’s highest mortality rates, which has certainly taken its toll on the health care system in this area, imposing massive demands on this hospital,” explained Tshepo Kgoloane, Community Operations Manager for Cookhouse Wind Farm.

Speaking at the event, Dr Toyeep Yusuff, CEO of Andries Vosloo Hospital said, “The donation has helped in no small measure to render quality health care to our community. Old, dilapidated beds are now replaced with new ones and the green medical grade sheets; both help improve the waiting time of access to critical emergency surgeries.”

Although the equipment is meant to primarily assist this hospital during the current health crisis, the equipment will be used beyond the pandemic considering that oxygen flow meters and regulators, medical oxygen regulators, BP machines, paediatric pulse oximeters and vital sign monitors, all serve to provide a better health service.  The donation also included 50 bed frames, along with the required mattresses and hospital grade coverings to help the hospital manage the increased demand for beds.

Loretta Di Zio, Economic Development Director for Golden Valley Wind Energy Facility added, “This collaborative donation directly assists local government in delivering community health care, of which we are pleased to be part of, as we view this as an important indicator of our support for the needs of the community and ongoing partnership with our direct economic beneficiaries.”

Cookhouse Wind Farm Healthcare Flagship Initiative, which was launched in January 2018, includes funding for healthcare, equipment and other requirements.  The programme is a high impact initiative, benefitting the communities of Adelaide, Somerset East, Cookhouse and Bedford.