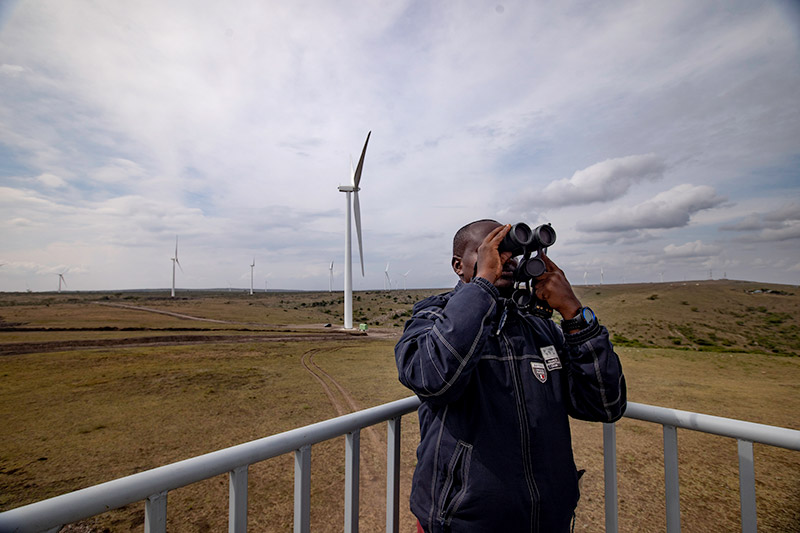 “During the advanced development stage of Kipeto’s construction, two vulture species were found less than 15kms from the site, namely the White Backed Vultures and Ruppell’s Vultures, species that had recently been up-listed to “Critically Endangered” by the IUCN. Populations of both of these vulture species are facing rapid decline primarily due to retaliatory poisoning, resulting from pastoralists lacing dead livestock carcasses with poisonous agricultural chemicals. The intention of this poisoning is to kill predators, such as lions and hyenas, as a result of human-wildlife conflict. Sadly, when vultures eat these carcasses they also die, sometimes killing hundreds or even thousands,” explained Dominic Kimani, Kipeto’s ornithologist, who leads a team of 31 bird monitors, together with deputy ornithologist, Mary Wanjiru Warui.

As reported in BTE Renewables’ 2021 Sustainable Development Report, released earlier this year, Kipeto commenced with its on-site mitigation programme, including SDOD, when the project went into operation last year July.  The SDOD system is implemented through notification by a team of bird monitors to the wind farm’s on-site operations room, where individual wind turbines are switched off when the priority species, which is any animal species that is of wildlife management concern, are in the vicinity, and switched on again once the bird has passed by.

The data shows that the SDOD significantly rose in the last quarter of the year, brought on by a drought that resulted in an increase of wildlife and livestock carcasses, consequently attracting large numbers of vultures and other raptors to the area.

Despite the relatively short period, the programme has reported a total of close to one hundred and seventy shut downs, the majority (92%) of which were for vultures, with a further 8% for raptors and other priority flocks of birds. This has been implemented with 100% success for vultures, and only one unfortunate instance of another priority species collision. In this instance, the team undertook a root cause analysis and have since adapted the programme to ensure this is avoided in future, resulting in 100% successful implementation of SDOD since then.

“We’ve also had a two-man observer team monitoring bird activity daily, at eight vantage points, during raptor active hours between 09:00-18:00, since December 2019. This has yielded a significant set of data, which has provided a great deal of information for conservation organisations with whom we work,” added Dominic.

The Biodiversity Action Plan (BAP), which comprises close collaboration with the local community to protect the surrounding flora and fauna, was developed in consultation with various nature and wildlife conservation groups. In terms of off-site conservation measures, Kipeto and its implementation partners have made great progress, with activities including:

The same system has been implemented at BTE’s Excelsior Wind Energy Facility, South Africa, where the on-site mitigation programme to avoid losses also includes the industry-first implementation of the SDOD system for priority species.  This system, which was piloted in August 2020 before being fully implemented, has to-date resulted in no less than three hundred and fifty shut downs being successfully called for, with 100% success for Cape Vultures and 99% for other priority species.  A number of off-site conservation initiatives have also been implemented with conservation organisations in South Africa.

The Kipeto Wind energy project is Kenya’s second largest wind project and is based in the Esilanke area in Kajiado County. The project, which spans 7 000 hectares, reached full commercial operations in July 2021 and is supplying 100MW of additional power to the Kenya national grid and providing clean power to approximately 250,000 households.

BTE Renewables (formerly BioTherm Energy) has been operating in Africa since 2003 and is positioned as a leading Pan-African renewable power developer with nearly 400 MW of wind and solar projects in operation in South Africa and Kenya. The company is owned by Actis, the world’s leading emerging markets investor.

The Kipeto Wind Power Project reached financial close in December of 2018 and reached commercial operation in July 2021. It has a 20 year Power Purchase Agreement with KPLC, and consists of 60 wind turbines and 17km 220kV transmission line. The project is funded by equity from BTE Renewables (88%) and Kenyan-owned Craftskills Limited (12%) alongside senior debt from the U.S. International Development Finance Corporation (“DFC”), the US Government’s development finance institution, and African Trade Insurance Agency (“ATI”) is providing an on-demand insurance product for the project.