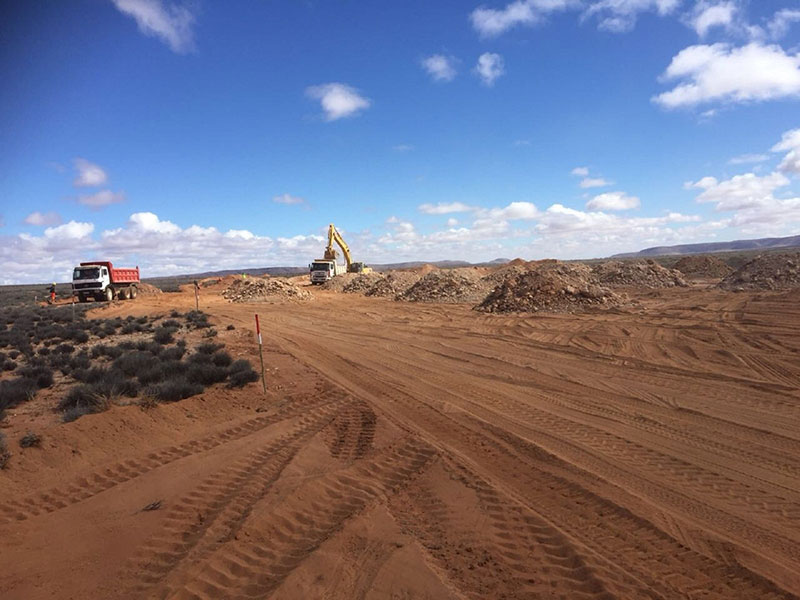 The 140MW Kangnas Wind Farm, one of the REI4P’s giant Bid Window 4 projects, is gearing up for construction, having already cleared 95% of its site roads, totalling over 52km’s. 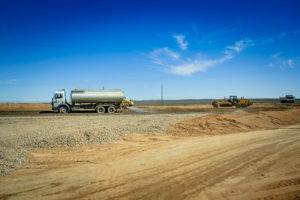 Situated in the North West corner of South Africa, the terrain is typical of the Springbok Flats Karoo Basin, with a rocky underlay prevalent in over 80% of foundation hardstands. The construction team, led by Manie Kotzé, has already managed to clear thirty-three hardstands as well as excavating two turbine foundations. “Clearing and grubbing is an essential part of all construction development, paving the way for us to begin excavating the turbine foundations,” explained Kotzé, Construction Project Manager for Kangnas Wind Farm.

Even though it’s still early days in the construction process, considering that financial closure was achieved just three months ago, the construction team has also commenced with controlled blasting, to a depth of 2,5metres, on five hardstands and is forging ahead to begin building the turbine foundations.

“We hope to have excavated twenty-one foundations by the end of September and then can justly say that construction is truly underway,” added Kotzé, who describes the technology behind generating wind power efficiently and effectively as fascinating.

Kangnas Wind Farm is situated in the Nama Khoi Municipal area, in the Northern Cape.  This Province is home to more than half the country’s 112 independent power producers (IPP), with more than 19 projects already connected to the grid with capacity of 900MW.  The Northern Cape is the recipient of the majority of IPP’s from the latest bid window, green lighted in April this year, which will bring 15 new wind, solar PV and CSP projects to the Province

Once operational, Kangnas Wind Farm will deliver 140MW’s of clean renewable power from its sixty-one, 115m-high, wind turbines. It will have the capacity to generate around 563 500 MWh of clean renewable energy per year and is expected to supply electricity to power up to 120 000 South African homes.

Kangnas Wind Farm is expected to eliminate approximately 550,000 tonnes of carbon emissions each year when compared to traditional fossil fuel power plants. In addition to zero carbon emissions and reduced use of fossil fuels, the country will benefit from almost zero water consumption that is required during the generation process.

The 140MW Kangnas Wind Farm is owned by a number of equity members, these include: Mainstream Renewable Power, along with a consortium of investors such as the IFC and the Rockefeller Brothers Fund. Mainstream Renewable Power is the leading independent developer of utility-scale wind and solar power plants in high-growth emerging markets. LEKELA POWER, a renewable power generation company, which delivers utility-scale projects that supply much-needed clean energy to communities across Africa. H1 HOLDINGS, a wholly black owned and operational South African energy company, with a focus on developing and investing in projects in the power sector. AFRICAN RAINBOW ENERGY AND POWER, which aims to be a leading South African and African energy company, focused on clean energy solutions and is committed to contributing positively to the strategy and operations of its investee projects from a platform of sector specific knowledge. OLD MUTUAL LIFE ASSURANCE COMPANY (SOUTH AFRICA), one of Africa’s largest independent investment managers. KANGNAS RENEWABLE ENERGY COMMUNITY TRUST, a local Community members through established community trust with shareholding funded by other project equity partners.