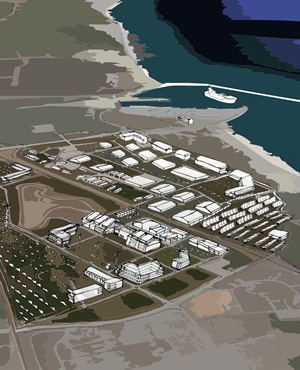 The project was derailed because government and Eskom halted the signing of new power purchase agreements.

DCD Wind Towers, a plant that used to manufacture wind turbines, was a joint venture between the DCD Group and the IDC.

The DCD Group had a stake of 80% in DCD Wind Towers. It folded in 2016 due to lack of business as new orders could not be placed.

This week, IDC spokesperson Mandla Mpangase told City Press that they were looking for another way to utilise the plant, which has been lying idle.

“The IDC is currently engaged in a fair and transparent search for a strategic equity partner to assist in resuscitating the project. The envisaged solution may entail alternative usage of the plant. The search for a solution is at an advanced stage, and proposals have been received and will be assessed early this year,” said Mpangase.

DCD Wind Towers employed 125 people of whom 115 lost their jobs due to the closure of the plant. The remaining 10 are doing general and menial work which includes general maintenance including maintaining the plant and equipment.

“The plant closed due to the absence of new orders because of the delays in projects related to the Renewable Energy Independent Power Producer Procurement Programme reaching financial close,” he said.

Delays in the signing of power purchase agreements due to the misalignment between government, Eskom and the renewable energy industry are stalling investments worth R58.5 billion and the creation of 15 000 jobs. The plant had the potential to produce 200 wind turbines a year.

Digby Glover, DCD Group CEO, said they had to sell their stake in the joint venture to the IDC for R1.

“This was three years of large investment and costly production ramp up required by the new facility. Ironically, the DCD had enough work to keep the facility full to 2021 and beyond,” said Glover.

“It will be difficult to recover this position, even if the renewable energy programme goes ahead. The cost of ramp up, and then the extended delays, has been massive,” said Glover.

“The value of destruction to the renewable energy industry and to our economy as a result of the delays and uncertainty is massive. The misalignment between Eskom, the department of energy, other government entities and the industry itself has caused irreparable harm. The amount of investment in this programme, including significant foreign direct investment, is huge.

“The harm that the deliberation to conform to stated government policy has caused enormous damage. South Africa is desperate for investment. Unfortunately, debacles such as this will only discourage future inflows,” Glover said.

Eskom spokesperson Khulu Phasiwe said the delay was not caused by the utility as it was waiting for a directive from the department of energy about which projects to sign and at what price.

City Press approached Nomvula Khalo, a department of energy spokesperson, for comment. However, she did not respond.