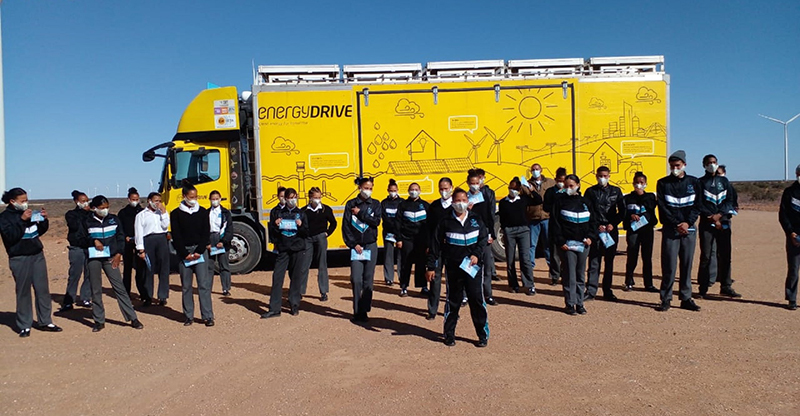 The custom-built EnergyDRIVE truck wrapped up its three week journey with a stop-over in the Northern Cape’s Springbok area. The edu-vehicle, which features a solar roof structure, biogas digester, photovoltaic panel display unit as well as a solar hot water display unit, will provide a fun and impactful way for learners from Okiep High School to grasp the benefits and uses of renewable energy technologies.  This forms part of the Kangnas Wind Farm’s community education programme, which has a keen focus on Science Technology Engineering and Mathematics (STEM) education.

“The container features attractive interactive demonstration models, which assist with understanding a range of renewable technologies, raising awareness of renewable power resources as well as addressing the important issues associated with climate change.  Furthermore, it also exposes learners to an industry which offers a host of career options and opportunities,” explained Cheryl Persensie, Economic Development Manager at Kangnas Wind Farm.

The 2021 EnergyDRIVE kicked off its trip, leaving its base at the Durban University of Technology (DUT) on 1 September and will wrap up its journey three weeks later in the Northern Cape, having reached many hundreds of learners across the country’s green energy map.  This is the third time that the edu-vehicle has made this journey, since its inaugural 2017 trip.  It has already reached almost 3 000 learners, in Grades 9 to 12 and is a result of a partnership between the South African Wind Energy Association (SAWEA) and the DUT, who consider high school learners to be the leaders and decision makers of tomorrow.

“We believe that it is important to stimulate an interest in learners who may like to pursue a career in the field of renewable energy, which is growing exponentially, not only in this Province, but throughout the country, as we transition to renewable energy sources, concluded Persensie.