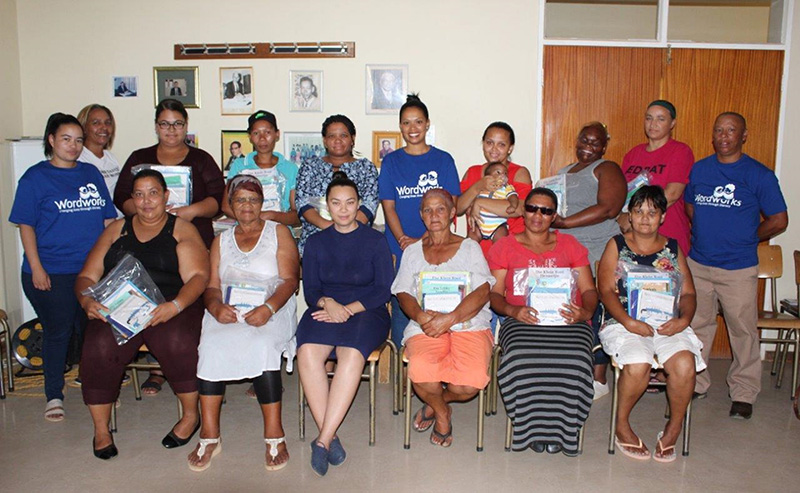 20 Loeriesfontein parents, who graduated as accredited parent-teachers, following an eight-week literacy training programme last year, were excited to receive language study books, which will help them to further help their children.

Each parent received a pack consisting of both English and Afrikaans books, all designed to help build language and confidence in children between the ages of 4 and 8. “This programme is not only about academics, but it also helps parents to build a relationship with their children,” explained Joline Klaaste, Acting Principal at Loeriesfontein Primary School.

This mother-tongue literacy programme trains teachers and parents of young learners at Loeriesfontein Primary School.  It was launched in 2019 and has been heralded a success by the community as it is a massive boost for literacy in this Northern Cape town.  It builds confidence among parents and is expected to have a direct impact on foundation learning, as literacy is a key driver for both language and mathematics.

“We are so pleased to be moving forward with this programme.  The first step was to train and accredit facilitators; who returned to facilitate the parent workshops; with the next step being to resource each and every home in which graduate parents reside, with books,” explained Vanessa Fredericks, Economic Development Manager for Khobab Wind Farm, funders of this programme.

This programme, designed to strengthen language and emergent literacy in Grade R children between ages five and six years, kicked off in Loeriesfontein in 2019.  This interactive, activity-rich and CAPS-aligned programme, is built around a story-based framework.

Parents spoke of how important directed play is in helping them and their children as well as the benefit of learning from other parents. Additionally, some parents commented on the value of learning to be more patient and better listeners, which helps to develop a child’s self-confidence.

“This programme helps parents to provide better support at home, develop their children’s literacy skills through play techniques and to fully appreciate that they are their children’s first teachers, an important and critical role in foundation phase development,” concluded Alichia Beukes, lead programme facilitator.